I’ll meet you on the passerelle Debilly 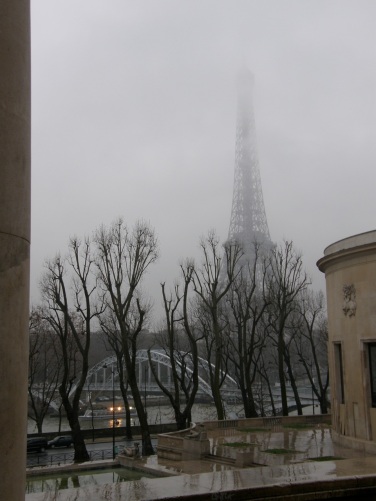 Philippa and I had just left the Palais de Tokyo. Outside it was a grey rainy day. I slipped on the stairs going down to the river, but it was Paris, and I didn’t mind so much.

Soon I was photographing others who seemed to take the rain in stride. I liked the bridge, but I was concentrating on the people and their umbrellas. 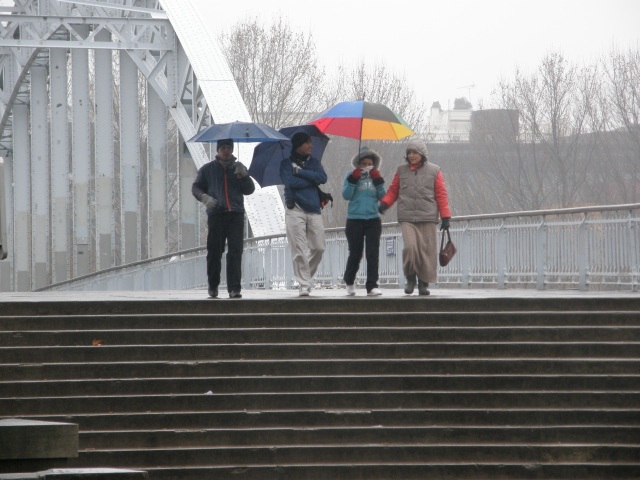 We encountered the bridge on other occasions, but I never had a chance to look at it more closely. Then, last December, I found myself near the bridge with time on my hands on a sunny day. 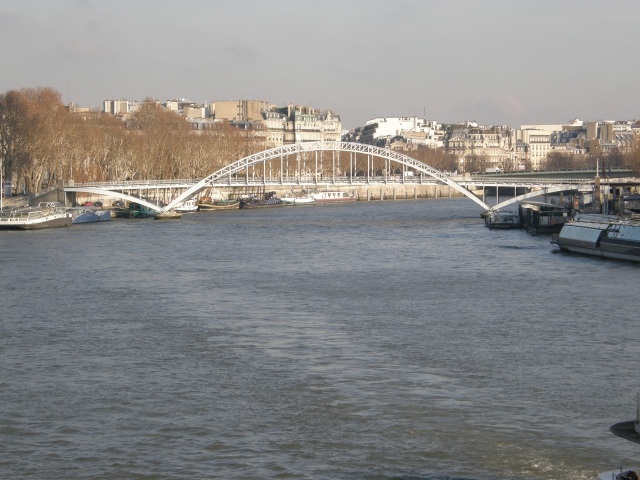 As I drew closer, the bridge seemed to grow ever more exuberant. 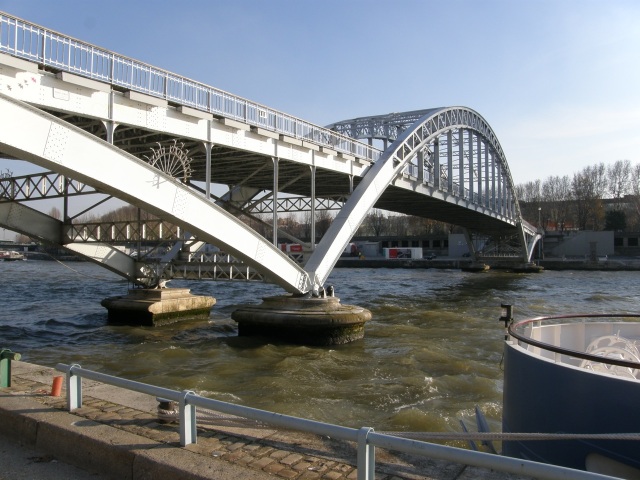 I was captivated. It was as if structural steel had captured the path of a skipping stone thrown from the bank of the Seine across the river.

I always want to see the underside of bridges. Beneath the bridge, just above water level, I could appreciate the geometry of structural steel. The river was high that day, and fast-flowing muddy water bent gracefully around the piers. No vehicles rumbled overhead; I could hear the water. 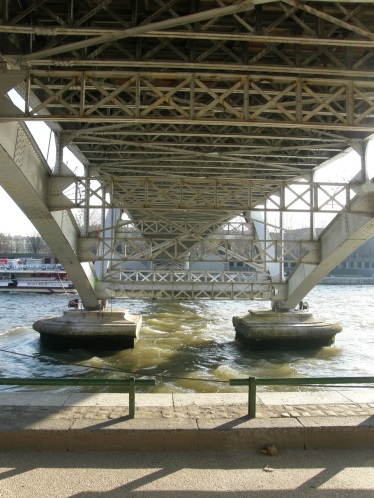 I was intrigued by the gracefulness of the two structural members that transfer the load to the bearings that support the bridge and allow slight movement as the bridge expands and contracts with changes in temperature. 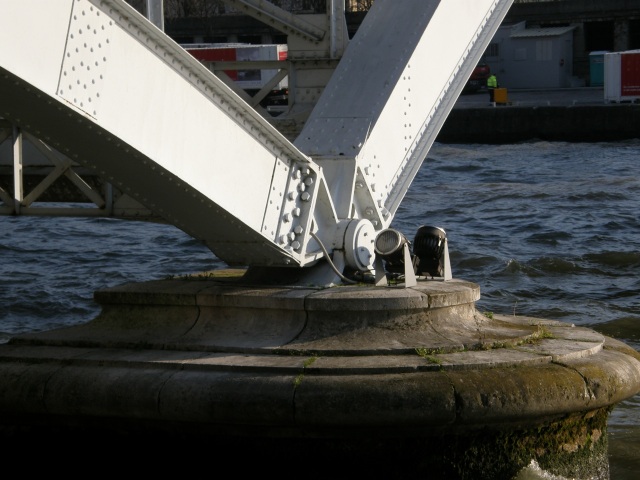 I also paid attention to the signs with no words. One sees variants of this warning all over Paris. The sharp points contrasted with the smooth regularity of the rivet heads. 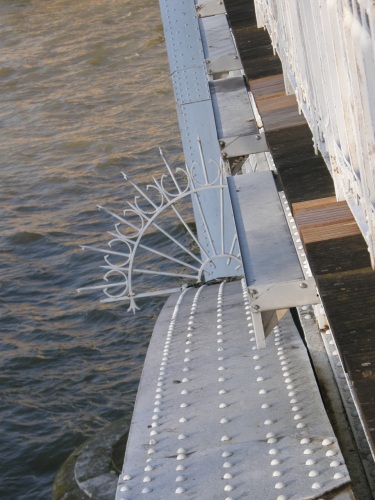 Soon I discovered that there was more to this bridge than seductively shaped ironwork and gracefully weathered wood. I began to notice more and more unusual details. 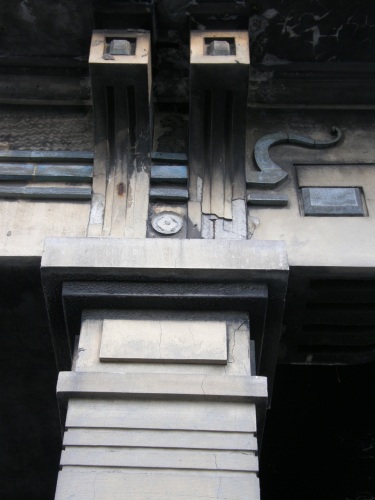 Clearly someone had been given the freedom to make something very special.

The columns were most unusual, the work of an artist capturing the waves on the Seine, an artist reminding us that Paris is an important port. 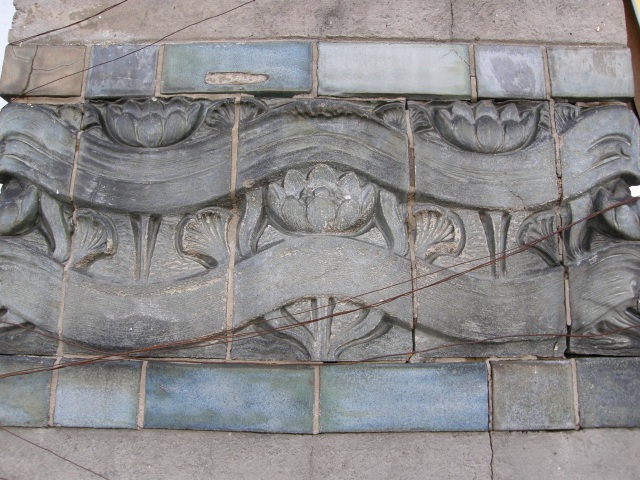 On that afternoon I was looking at a rare beauty that clearly needed help. And it appears to be getting it. Restoration is under way. 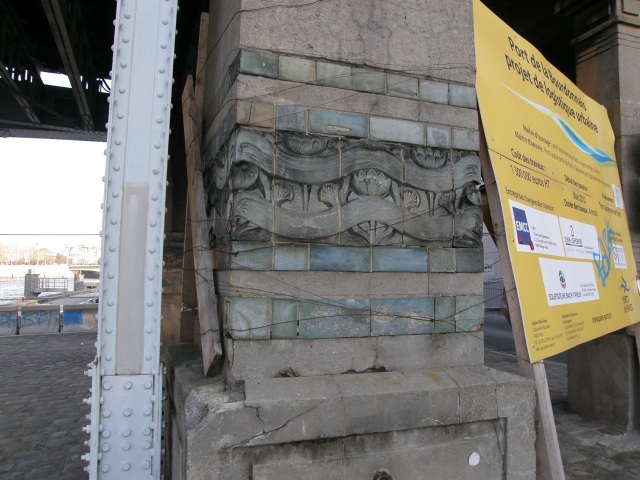 One can only hope that the inevitable signs of age can be restored and that the passerelle will one day be returned to its former glory. 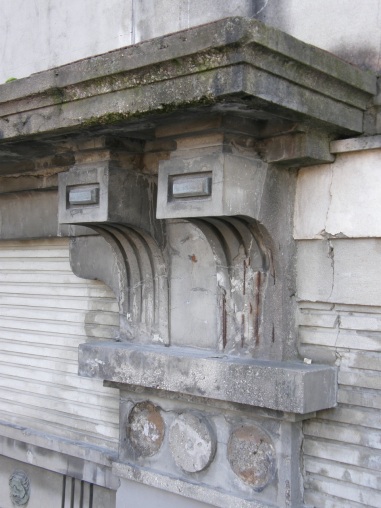 Perhaps a sensitive restoration will leave some evidence of former ways and former days. I am rather fond of this evidence of an older way of putting in electric wires. Surely anyone who has worked on rehabilitating an older house will recognize the porcelain insulators. I like them. I hope the remnants will stay as a tiny bit of history in-situ. 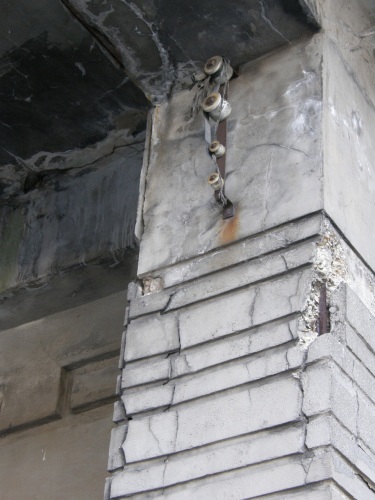 After a couple of hours, I wandered away from the bridge and a few minutes later my cell phone rang. It was Philippa; she was on the right bank near the pont de l’Alma, which I could see quite clearly as I talked on the phone. My path to our meeting place inadvertently turned out to include a construction site I had to exit from carefully. But I did get an unusual view of a very different, and very modern bridge. 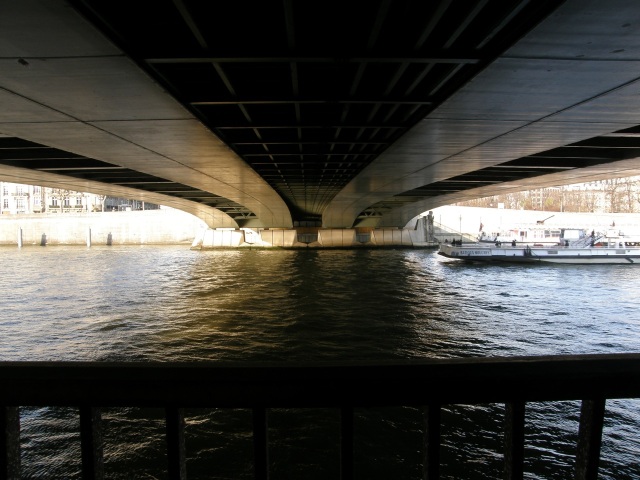 Back at home in Toronto I started to find out more about the passerelle Debilly.

Structures made for International Expositions often have a short intended lifespan and most do not survive. The Eiffel Tower built for the 1889 International Exposition was expected—at least by some—to be torn down soon afterwards and it nearly met that fate. Three of my favourite Parisian sites, the Petit Palais, the Grand Palais, and the Alexander III bridge, were built for the Universal Exposition of 1900 and they too have survived. The modest passerelle Debilly was also a survivor from 1900.

It was originally known as the “passerelle de l’exposition militaire” and then the “passerelle de Magdebourg,” before it took the more dignified name of Passerelle Debilly in 1906 to honour the First Empire Army General Jean Louis Debilly, who died in the battle of Iéna (Jelna) in 1806. The Exposition included buildings on both sides of the river and the bridge was designed to link the Army and Navy Hall on one side with the “Old Paris” series of buildings on the other bank. These buildings have long since disappeared, but the bridge still crosses the Seine with pont de l’Alma upstream and the pont d’Iéna downstream.

The image below, taken from a stereograph view, shows the bridge, on the upper left, entering the Army and Navy Hall, a magnificent structure. The Eiffel Tower is out of sight to the right of the photograph. 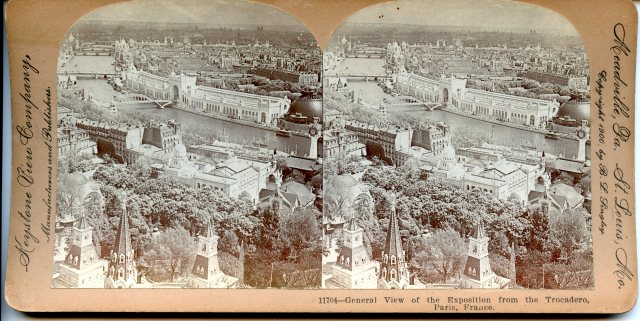 Here’s a closer view of the Army and Navy Building as seen from the passerelle. 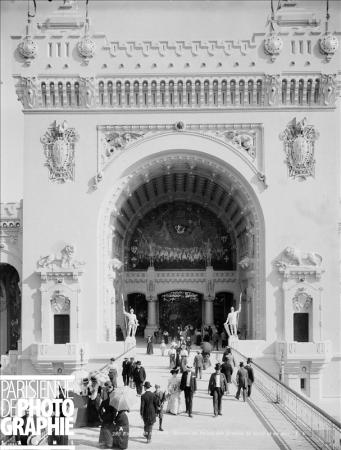 The bridge survived in part because it was useful and well-built. The City of Paris acquired it in 1902. Originally built to align with Avenue Albert de Mun, the city in 1906 moved it “quelques dizaines de mètres en amont” (several dozen metres upstream, actually more than 200 metres) towards Pont de l’Alma to a position opposite rue de la Manutention. Here it was further away from the pont d’Iéna, a name of no happy memories to Debilly.

Not everyone approved of the bridge. In 1941 one architect argued for its destruction because it was no more than an “accessoire oublié d’une fête passée” (a prop or accessory from a faded or past festival). Cooler heads or perhaps simply inertia prevailed and the bridge was left as is. In 1966 it was added to the supplementary registry of historical monuments. It was repainted in 1991 and the deck redone in 1997.

The 3-span bridge has a total span of 120 metres, but the large central span of 75 metres allows the piers to be quite close to the banks. This gives a wider navigation channel than would be the case with arches of equal length. The 22.5-metre side arches are actually half arches.

The passerelle Debilly was designed by engineers Jean Résal, Amédée Alby and André-Louis Lion. Résal was a professor at the famed École Polytechnique and he and Alby were the design engineers for the much more famous Pont Alexandre III, which also opened in 1900. Lion was the official engineer for Ponts et Chausées (Roads and Bridges).

The stunning ceramic tiles were made by the French company of Gentil et Bourdet.

Well-known as a rendezvous for lovers, Paris has also been the meeting place for spies from various nations. During the Cold War, the passerelle Debilly was apparently a favoured meeting place for spies and assorted “diplomats” who needed to exchange messages, currency, or other things. It was also the bridge on which, several days after the fall of the Berlin Wall, an agent of the Democratic Republic of German was found dead.

Who knows what other stories the bridge could tell? What happened when Martine and Anna had their “vacances” in Paris? 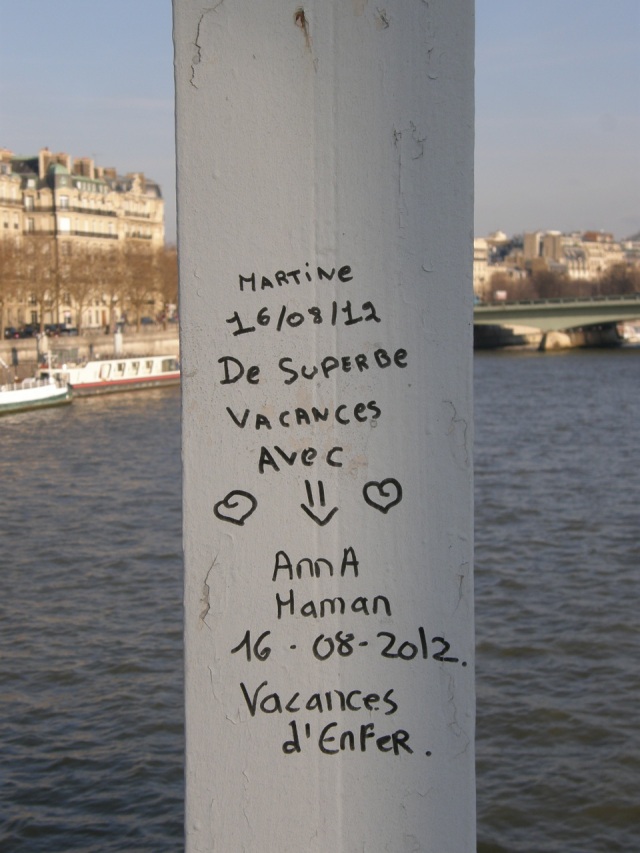 Perhaps next time I will arrange a top-secret meeting on the bridge to exchange, um, stereocards?

Text and photographs by Norman Ball. Photograph of the Army and Navy building from Paris en Images.

Parisian Fields is the blog of two Toronto writers who love Paris. When we can't be there, we can write about it. We're interested in everything from its history and architecture to its graffiti and street furniture. We welcome comments, suggestions, corrections, and musings from all readers.
View all posts by Parisian Fields →
This entry was posted in Paris bridges and tagged Amédée Alby, Army and Navy Hall, Eiffel Tower, General Jean Louis Debilly, Gentil et Bourdet, Jean Résal, passerelle de l’exposition militaire, passerelle de Magdebourg, passerelle Debilly, pont de l’Alma, Universal Exposition of 1900. Bookmark the permalink.

8 Responses to I’ll meet you on the passerelle Debilly