There are not a lot of private houses in Paris. Let alone private houses with a direct view of the river and the Eiffel Tower. So 34, avenue New York, home of the Mona Bismarck American Center for Art and Culture, is already something out of the ordinary.

We went there last December to see an exhibit of prints and drawings by Mary Cassatt (I wrote an article about it for Girls’ Guide to Paris). The exhibition was interesting, but I was captivated by the house. The lunchroom offered a view of an enclosed garden, and a large poster on the wall provided the beginnings of an answer to the question in my mind: “Mona Who?”

The short answer would be: a fabulously wealthy American society hostess (1897–1983), once nominated the “Best-Dressed Woman in the World,” and benefactress of the institution that occupies her former Paris residence.

There was a second exhibit on the upper floor, and I climbed the oval staircase to look around. A large room contained a grand piano, a gilded mirror, some candle sconces, and a few pictures. I spotted a small corridor leading to a powder room.

One seldom has the opportunity to wash one’s hands and comb one’s hair in such elegant surroundings, and for a few minutes, I made myself at home.

There were three black and white portraits of Mona on a ledge, so I photographed them (badly). However, I later found clearer versions of the same images online. Here is one of them.

Back home in Toronto, I decided to find out more about the woman whose house I had visited. There is remarkably little written about Mona Bismarck. And after reading what there was, I think I know why. Here is the story.

Mona (or Frances) Strader was the daughter of a Kentucky horse breeder and trainer, Robert Strader. Her childhood was sad and chaotic. Her parents divorced when she was four or five years old. She lived first with her maternal grandmother, then with her paternal grandmother. The former was later declared insane and sent to an asylum. An uncle suffered the same fate. Another uncle shot a prostitute and then turned the gun on himself. A third uncle died in a hunting accident. Only her father seemed to be a steady influence in Mona’s life, and he was not always around.

The only way out of this nightmare was marriage. Mona’s starter husband was Henry James Schlesinger, son of the richest man in Wisconsin. She’d met him through her father’s racing contacts. She was 19; he was 39. The marriage was not a success. In 1920, Mona sought a divorce after three years of marriage, and left her young (and only) son in her husband’s custody in Milwaukee.

At this point, she had already met husband No. 2, a wealthy banker called James Irving Bush, said to be the “handsomest man in America.” The two married in New York in 1921; she was 24; he was 38. Fairly soon, Mona discovered that her new husband behaved appallingly when he was drunk, and he was often drunk. This time she went to Paris to obtain a divorce (note to self: find out more about Paris as the “divorce destination” in the 1920s and 1930s).

Back in New York, Mona started up a fashion venture with a friend called Laura Curtis, who was engaged to be married to Harrison Williams, one of the richest men in the United States (a big step up from the richest family in Wisconsin). Rumours abounded that Mona “stole” Harrison’s affections while her friend was out of town. In fact, Laura Curtis jilted Harrison Williams, leaving him free to marry Mona. But the rumours won and it took Mona some time to live them down.

Fortunately, she didn’t have to do so while living in New York. Harrison Williams took her on a honeymoon cruise around the world in his enormous yacht, Warrior. She was 29; he was 53. It was 1926. 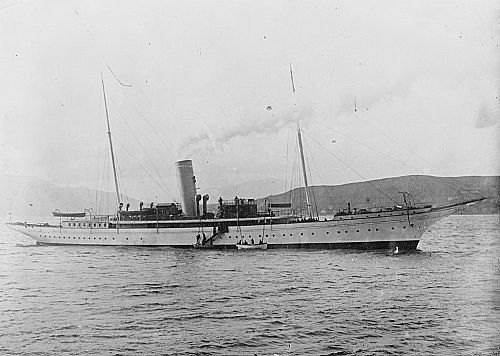 Three years later, the stock market crash reduced her husband’s fortune of $680 million to a paltry $5 million. The Harrison Williamses apparently failed to notice their change in fortunes. They had a Long Island mansion at Oak Point; a New York town house on Fifth Avenue; an all-white house decorated by Syrie Maugham in Palm Beach; a Paris apartment on the rue Pouquet; and a villa with a large garden on the Island of Capri in the Bay of Naples called Il Fortino.

Meanwhile, Mona had become the darling of the fashion mavens. Cecil Beaton never tired of photographing or drawing her, although he said he could never fully capture the beauty of her huge acquamarine eyes and extraordinary silver hair.

Vogue and Harper’s Bazaar published endless stories about her exquisite life and clothes. And in 1933, the Paris couturiers Molyneux, Lanvin, Vionnet, Chanel and Lelong voted her the world’s “best-dressed woman.” Okay, the nomination was a little self-serving, since she wore their creations, but they were not alone in praising her sense of style. And in the end, it was Balenciaga who was her favourite couturier; he opened his fashion house in Paris in the late 1930s.

Perhaps the best way to sum up Mona’s life at this point was the phrase used in 2007 by Emily M. Banis in the title of her master’s thesis for the Fashion Institute of Technology in New York: “Mona: Portrait of a Female Dandy.”

Mona was a “dandy” in the sense that her greatest creation, her work of art, was her own appearance and her lifestyle. That was what she did. That was all she did. Nobody ever saw her reading a book. Nobody ever credited her with a witty remark. If she wrote letters, they were unquotable. She never learned French or Italian, despite years spent in those countries.

What Mona created was herself. After her chaotic and unhappy childhood, her achievement was to control every aspect of her life. Her houses were perfect. Her clothes were perfect. Her dinners were perfect. Her flowers were perfect (she loved gardening and grew her favourite flowers from Kentucky and England in the gardens in Capri, even though every drop of fresh water had to be brought from the mainland). Nothing less than perfection was acceptable.

In 1943, Dali painted her in an extraordinary portrait. In the first version, he painted her naked, but she objected, so he painted her wearing rags (but with her ever-present pearls), surrounding by objects from antiquity that evoke a certain menace. Apparently Mona loved it and it graced her Paris house on the avenue New York until a few weeks ago.

The following year, Mona acquired the final feature her life had lacked: an aristocratic title. She married Count Edward von Bismarck, the grandson of the German chancellor of that name. Eddie was thought to be gay, but he had been Mona’s long-time friend and confidant. He apparently believed that he was dying of stomach cancer, and she may have married him assuming it would be a very short marriage and a long widowhood. Eddie lived for another 16 years.

By this time, Mona had lost her trademark silver hair. In the 1950s, according to most sources, she started to dye her hair brown, and her friends were astonished that she would give up her most recognizable feature. Maybe, in middle age, she no longer wanted to be so recognizable.

Mona was devastated by the closing of the house of Balenciaga in 1968. The story goes that when she heard the news, she did not leave her room for three days. After this period of mourning, she switched to Givenchy.

Eddie died in 1970. Mona then married his doctor, Umberto de Martini, 14 years her junior. Big mistake. She thought he would look after her as she aged, as he had looked after Eddie; he thought she would fund his extracurricular activities, which included a mistress in England. When in 1979, he accidentally drove his Alfa Romeo off a bridge near Naples (her friends made the inevitable joke about “Martini on the rocks”), she was delivered from a burdensome marriage. She went back to using Bismarck as her surname. 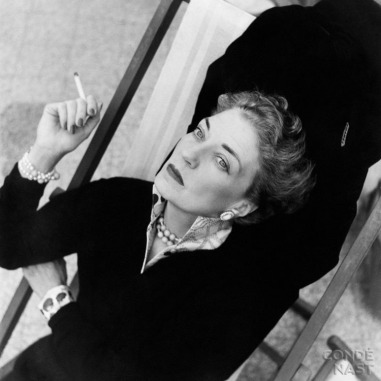 She lived for four more years, dying in 1983 at her house on the avenue New York, aged 86. The terms of her will would have created an arts foundation that encompassed her Paris house and the artworks in her villa at Capri. But she had forgotten her son by her first marriage, who contested the will and demanded an inheritance larger than the measly million or so she had assigned him. The Capri villa and its contents had to be sold, along with other parts of her collection.

Mona created herself. And when she died, her greatest achievement in life disappeared. Beauty and a glamorous lifestyle do not survive when the individual who brings them to life has gone. And exotic gardens may not survive the death of a gardener. This, I think, is why so few people have written about her, and why there is no full-length biography.

I didn’t know any of this as I washed my hands and snapped a couple of pictures of Mona’s first-floor powder room. She was a remote presence, a name on an oil painting in the front hall. But clearly many people have benefited from her legacy. The Mona Bismarck American Center may not be as well funded as Mona wanted it to be, but it nonetheless sponsors concerts and exhibitions that Paris residents and visitors enjoy, and the exhibit I saw was beautifully presented. The Center’s recent sale of the Dali portrait will contribute to its work. On February 5, 2013, the painting fetched a price of 2.6 million Euros at Sotheby’s in London.

Poor Mona. She had beauty, wealth, and an exalted social position. But in the photographs and portraits, she does not look happy. Be careful what you wish for. She wished for riches and control; she had riches during her life, but she could not quite control her legacy.

Parisian Fields is the blog of two Toronto writers who love Paris. When we can't be there, we can write about it. We're interested in everything from its history and architecture to its graffiti and street furniture. We welcome comments, suggestions, corrections, and musings from all readers.
View all posts by Parisian Fields →
This entry was posted in Paris art, Paris museums and tagged Balenciaga, Cecil Beaton, Chanel, Eddie von Bismarck, Emily M. Banis, fashion, Harrison Williams, Henry James Schlesinger, James Irving Bush, Laura Curtis, mary cassatt, Mona Bismarck, Salvador Dali, Sotheby's London, Syrie Maugham, Umberto de Martini, Vogue. Bookmark the permalink.

24 Responses to The forgotten fashionista