A villa in the south

When we say the south, we don’t mean the south of France, we mean the southern parts of Paris, particularly the 14th arrondissement. And when we say “villa,” we don’t mean a detached house. The villas of Paris are cul-de-sacs, many lined with distinctive buildings. Some are private and shut off from the world by a gate with a digicode, like the Villa Adrienne (which is actually a large square surrounded by attractive buildings). But most are accessible to the flâneur, and provide little glimpses of gardens and studios, workshops and lofts. Our favourite is the Villa d’Alésia, just off the rue d’Alésia, in the quartier known as Petit Montrouge.

The first thing we spotted as we turned in off the rue des Plantes was a combined studio and boutique at no. 51, Isapocket, which sells the work of several artists. This one-storey building, a former printing shop, is painted with whimsical motifs, which change from time to time.

On that visit, we bought a delightful children’s book called Papa Lézard and it turned out that the woman minding the store was the illustrator, Isabelle Pongitore, who with her husband David Loche, created Isapocket. She promised to draw a special illustration and inscription for Norman’s grandson Emmanuel, and we returned a few days later to pick it up.

The shop also sells various items (cards, tablecloths, aprons) featuring a map of the street, indicating which studios were used by which artists (we bought the apron, in green). The names of the former residents make up a who’s-who of 20th century art.*

After some years of wearing the apron, I finally spread it out and looked at it and tried to track down some of the names on it. (I hope you appreciate that I washed and ironed the apron to get it ready for its close-up, but I admit it’s seen some wear.)

Auguste Leroux, the painter and illustrator, was probably there the longest: he and his wife Clothilde lived at no. 11 from 1908 to 1954. Apparently they gave good parties. Jacques Grüber (a stained glass artist) had an atelier there too; he’s the one we can thank for the gorgeous ceiling in the Galeries Lafayette.

Henri Matisse was photographed in a villa d’Alésia studio by Brassaï in 1939. But it wasn’t his; it belonged to an American sculptor called Mary Callery. The following year, she lent it to Fernand Léger, who painted Composition aux deux perroquets there. Picasso’s name also appears on the drawing of the street – from what we can find out, he didn’t own a studio there, but his name has been linked to that of Mary Callery, so perhaps she let him use the place, too. 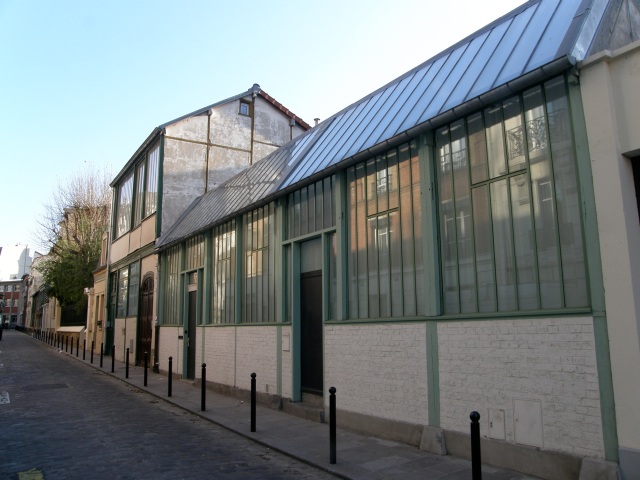 The Isapocket map shows only French artists and writers, but other illustrious names are associated with this tiny street. Aaron Copland lived there in 1922. Samuel Beckett hung out with a Romanian artist who had a studio at no. 10. All in all, most of the Montparnasse group of artists and writers probably fetched up there at some point – if they didn’t live or work there, they visited others who did. But who needs all this name dropping? It is a wonderful street to stroll along.

The road is narrow and cobbled and branches at the end – one part ends at a big gate, beyond which seems to be a school playground; the other part leads out to the tree-lined rue d’Alésia. Each house or studio is unique – no uniform Haussmannian façades here. The buildings come in different heights and colours, many with large expanses of windows, a couple set back from the street with tiny gardens in front.

There are still a few workshops and studios on the street, although most of the buildings have been turned into spiffy offices and flats. The oldest houses date from the late 1890s, when the street was created. (The street does not appear in its complete form on my 1897 map.)

An archway through no. 31 leads into a pretty public garden (le Jardin de la rue de Chatillon), a good spot for a picnic on a warm day. It was created in 2000 on the site of several demolished houses.

The yellow-brick building over the archway that leads into the garden (not shown here) was also a printing shop, but an unusual one in that it employed deaf-mutes (l’Imprimerie d’Ouvriers Sourds-Muets). Since printing can be fairly noisy, this strikes us as a fairly sensible business proposition.

We visited the Villa d’Alésia before we knew any of this. We just found it an attractive street filled with one-of-a-kind houses and we enjoyed wandering along, taking pictures and imagining the lives behind the unusual façades. 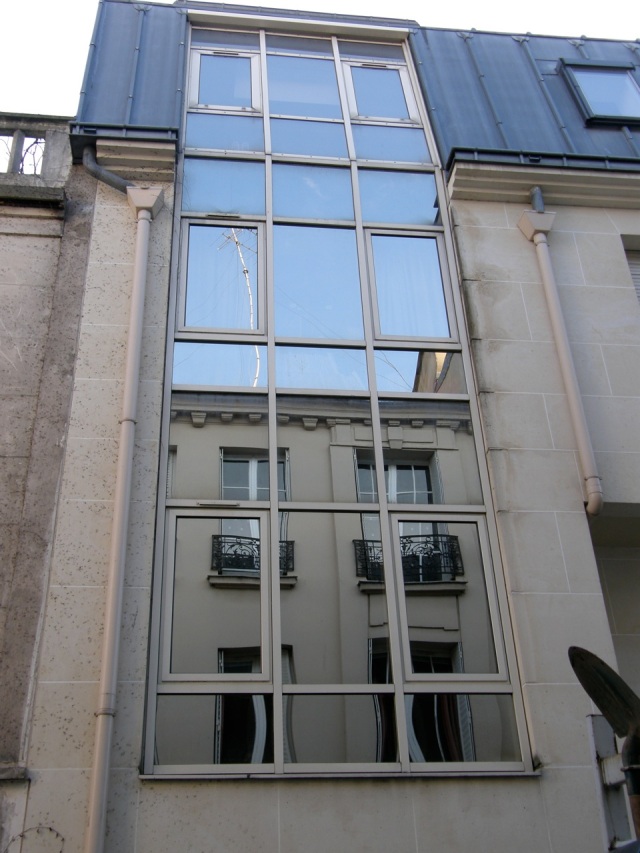 That’s one of the reasons we write this blog. We get to revisit in our memories the places we have seen, we dig up a bit more information about them, and we find out all kinds of new reasons to appreciate our collection of photographs and our memories of the city.

A friend of ours (who is both a war artist and a children’s writer) once said, “Writers are often told to write what they know, but I write about things I want to learn about,” and that is what we do. We write this blog in order to find out more about our favourite city, not because we are experts, but because we are still students with so much more to learn.

3 Responses to A villa in the south