We never cease to be amazed at the persistence of traditional children’s pastimes in Paris. Merry-go-rounds (known as manèges) are found throughout the city. Some offer children the added enjoyment of spearing brass rings as they go around the circle. Here is a photo taken last spring near the Musée Marmottan.

You can also find double-decker manèges near major tourist sights…complete with children riding on everything from roosters to tiny aeroplanes. Perhaps it’s just so the parents can take cute pictures. Who knows? But there they are, year after year. And the children in general appear to be having fun.

At Christmas, there are all kinds of old-fashioned delights. The line-ups for a traditional circus performance with animals, clowns, and trapeze artists at the Cirque d’Hiver are long and the nearby cafés are filled with families enjoying hot chocolate before or after the show.

Near the Bastille, we came across a children’s fun fair. Two of the most popular entertainments seemed to be the bumper cars (when was the last time you saw bumper cars?) and the pool in which children in waterproof spheres cavorted in the water.

We watched as a slightly apprehensive little boy was sealed into one of these things.

A moment later, he was happily flopping about as the sphere rotated in all directions.

There was also an inflatable (gonflable) rooster. Of course. 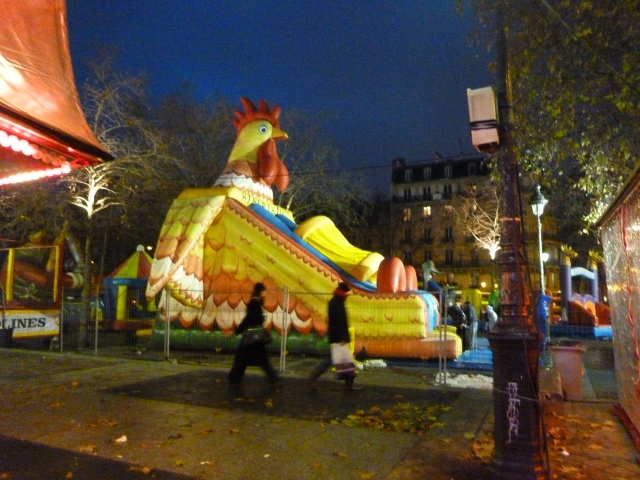 Children’s toy shops are a delightful exercise in nostalgia for grandparents, but the cynic in us wonders if the handmade wooden toys appeal to today’s children as much as computer games do. We honestly have no idea what French children do behind closed doors, but in the shops, the 1950s (heck, the 1920s) are alive and well.

On Christmas Day, we went for a walk in the Luxembourg Gardens, along with many other couples and families. We saw some young men playing table tennis in the snow (yes, really), and children having a snowball fight. Some people had found sheltered spots and were sitting enjoying the sunshine. It all seemed rather timeless and relaxing.

Christmas was chilly, but bright, and lots of people were out in cafés and cinemas, or just walking in a city still powdered with snow. We did not sense the Christmas hysteria we see in Canada.

As for the Boxing Day sales, they do not start until the middle of January. Apparently some fanatics do camp outside certain French stores in order to get coveted objects at a discount, but the madness is mercifully separate from Christmas itself.

New Year’s, of course, is party time, and may be a different story altogether. But Christmas is just a short holiday with better food than usual, and a time to enjoy some traditional pleasures. Maybe we’ll get one of those handmade wooden toys to bring home.

Parisian Fields is the blog of two Toronto writers who love Paris. When we can't be there, we can write about it. We're interested in everything from its history and architecture to its graffiti and street furniture. We welcome comments, suggestions, corrections, and musings from all readers.
View all posts by Parisian Fields →
This entry was posted in Paris popular culture and tagged Christmastime in Paris, Cirque d'Hiver, French toys, maneges, merry-go-rounds, Paris fun fairs, Place de la Bastille. Bookmark the permalink.